In 2016 I attended PHPLive conference, first bigger tech conference in my field at that time (as far as I know). A couple of months ago I got an opportunity to flip the sides to stand on the stage as a speaker. This is my little confession of what did it look like.

At the end of January, I was contacted by Janka from Shopsys company, the conference organizer, that they are looking for new faces. My email was shared by Tomas who is a known speaker not only at this event and who I was in a touch for quite a time.

"To become a speaker?" I thought to myself. You know, many developers daydream about sharing knowledge this way at least from time to time and I'm not an exception. But when the opportunity is real you start to think about the pros and cons of your choice, let it be acceptance of the offer or its rejection. And the rejection was something I was heavily thinking about, because, "Who am I to be there, whom others should be listening to?", right? Moreover, as the name of the event suggests, PHP is the main topic, but I'd been working with React on the frontend side for more time than it's healthy to be able to prepare a presentation at a level I'd be happy with.

After some hesitation, I made the first step, step outside of the well-known comfort zone, and accepted the offer. Next step was to find a topic. It turned out I had something to start with. I got some inspiration from my (short) notes on meeting habits - company and team culture is part of my favorite subjects - and came with the working title How to make a work-life better, so nothing connected with PHP nor technical in any other way. And to my surprise, it was gladly received.

Phew, that was easy! Yeah, but the harder part to come. I had just around three weeks to prepare myself for my first performance in front of hundreds of people.

Side note: PHPLive is specific in a way that it is held in two cities for two days. In Ostrava, Czech Republic, first day and in Zilina, Slovak Republic, the day after.

How to make a work-life better? I knew meetings is only one thing among many others I wanted to talk about. To be more happy at a job you have to be satisfied with your results. Good meeting habits may be helpful on your way of delivering the outcomes you seek for, but they are only one piece of the puzzle. To do a work that brings satisfying results you need some knowledge, enough of uninterrupted free time, the more the better. And of course, we all do need to take a rest. One cannot work from dawn to sunset every day on and on.

I'd divide the process of the talk preparation into three stages:

Though, I didn't jump to the next stage when I'd thought I'm done with the previous one, clearly, because I'd never known that. The process looked more like a triquetra and I never felt as satisfied.

I started to collect material from books I had read to that time and was so glad I had not been afraid to use the marker and to bend page corners to label interesting ideas for later use. Books are precious to me but they are still just a source of knowledge, just a tool, like a saw for a carpenter. One shouldn't hesitate to work with them that way like they were some historical relics (only if they really aren't, of course).

I also picked and reread several tweets and blog posts from others in the field. Added my own thoughts (not even mentioning photos) and in the end, my notes bloated up to nearly 10 pages.

At the school, we were learned how to create a presentation. Anyone who had slides without the page numbers was given black points. Nevertheless, I didn't add any numbers now. Not because I like the simple design and much of free space (which I do), nor because I'm a rebel (probably not, or?), but because it was clear enough for every event visitor that any talk will have up to 25 minutes. I just wanted them to focus on more important stuff (erm, me!).

I had done one more thing before I opened Google Slides. I needed to give those notes correct structure so I created a mind map: 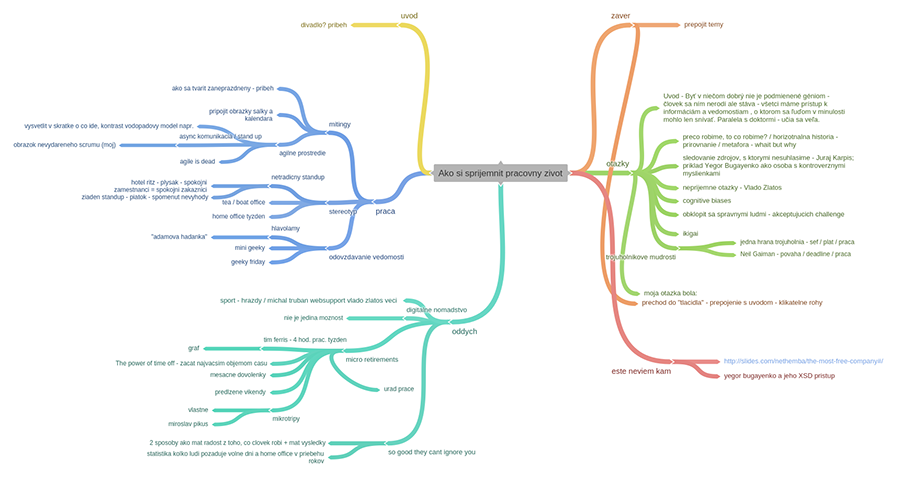 The map served me well in forming the slides as well as for a "final notes" for what I was actually going to say on d-day. Each slide couldn't be simpler with either a short title, a photo or a graph.

I bet many of you know TED, either the main conference or many individual derivates called TEDx. Most of the talks there have several things in common with one specialty - which is that no one reads from the slides (and those are also uncommon), but rather has the whole talk memorized. I think this gives more energy and tempo to the presentation. I came around a perfect article on Doing a TED Talk written by Tim Urban from my favorite waitbutwhy.com. I'm going to borrow one of the perfect diagrams he makes to illustrate his posts, the one about public speaking methods: 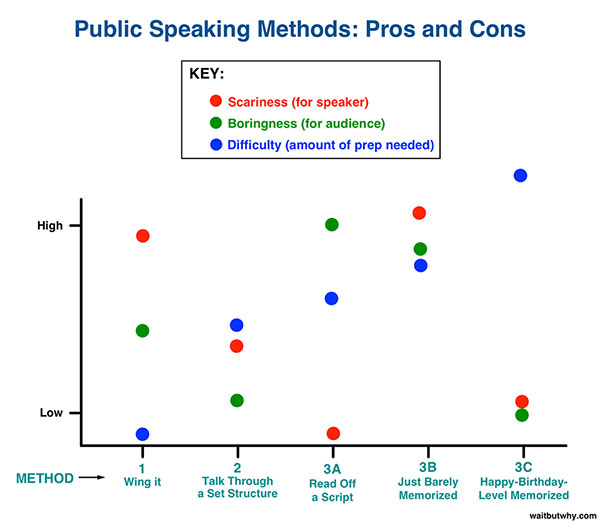 Funny thing is that all three items in the key are bad. They can just be bad or very bad. It seems like public speaking is a very stressful thing to do. I decided to go with the second method (talk through the set of structure), inclining more to the right side, which means I prepared some key sentences and, let's say, jokes, sort of... I had also read a book called Talk like TED and had watched several TED talks and commencement speeches. Not all of them were strictly connected with how to give a talk but really were inspirational in one way or another. Here are some I really enjoyed:

I made several training rounds of my talk home alone. After every round, I did some changed in the slides, rearranged them, edited wording, removed one thing just to add another while tried to fit into aforementioned 25 minutes block for one talk. That prepared me to the next big step - first test in front of the people - my colleagues. They were so kind and agreed they would serve me as guinea pigs, what I'm very thankful for. I prepared a place, chairs, projector and when everyone was ready to listen, started my talk. And it was horrible. Literally.

It turned out everything I did up to that miserable test talk still wasn't enough. I realized I need to give a talk to become somehow ready. Not just play solo and speak silently to no one. Actually giving a talk is the only way one can train speed, play with tempo, figure out where the pauses are appropriate and act upon what the audience do while talk is being given. Yeah, I ended that misery after 45 minutes covered in sweat. No need to note I still wasn't done with all I wanted to say - the end was in the last third of the presentation.

Nevertheless, I persisted and processed all the comments my calm friendly colleagues gave me, discarded a good third of the content and did next round of the solo testing, now with accurate volume and gestures and finally felt ready.

I was sitting in the back, watching Tomas Pilar giving his talk on Doctrine and thinking about how different our talks are. His strongly technical one with lots of code examples will nicely contradict with mine, without any mention of the code itself.

I also really appreciated I was the next speaker following him.

"Don't they have better things to do on today's Tuesday?"

"What the hell is going on with my vision?"

"Thanks, Tomas! Next talk is about habits at work, please welcome Roman!"

Was it all that bad?

Not at all! It was a great experience and I met some interesting people. I also learned many new things while taking notes for my presentation.

What is your advice to not-speaker-yet people?

First of all - find an audience open to listening to your talk and train beforehand. Bear in mind you'll probably have a mike in one hand so great gesticulation will mostly not be possible (especially with slide remote controller in the other hand) - this is something I really didn't think about. Watch your time - at home, I set the timer to be increasing from 00:00, but at the conference, it was counting down from 25:00. That confused me to the point from which I was not able to pay attention to the remaining time anymore.

What have you discarded from the presentation?

There is a lot I had to remove. I wanted to add more or less from the following sources (the whole list is a bit longer, though):

Do you have nostalgic feelings for Flash?

Well, I do! The experiences with Flash led me into the web development. I created a small example of what wasn't possible without Flash (source), rounded corners took my attention when I saw them on the web for the first time. I just didn't use it at the conference in the end.

Can we watch your talk?

Of course, you can! Roman Veselý – Jak si zpříjemnit pracovní život - hopefully, you understand Slovak. Let me know what you think.