I wasn't considering to attend any other conference this year besides Hackers Congress in Paralelni Polis, but, sadly, I haven't noticed the launch of the tickets sales until all of them were gone. But I got a free ride to WebExpo thanks to my colleague Erik from Ness KDC who was not able to attend. Same venue, different topic, same excitement.

It was the first time I attended such a big event inherently connected with what I like to do (in or outside of my job), so I'm very pleased I got an opportunity to be there, although, I can expect more such events to come in the future. The place of the event - Lucerna - is really nice (and big!), organizers did a great job to prepare everything for the good of the visitors, I didn't miss anything.

Keynotes' recordings are already available, so I added them below, to the individual presentation reviews. They were released only one day after the end of the conference, superfast! Some people didn't have a chance to go to the afterparty, I guess...

I tried not to attend many technical oriented presentations, mostly because I know I would not withstand the temptation to try new things for a very long time. Instead, my intention was to gather thoughts and to just think about theoretical topics, which would lead me to some kind of "big picture", I think I did my selection well.

Impactful Storytelling for Innovators and Disruptors

Susan's career started in Thailand, where she was helping to reduce AIDS spreading. "If you don't use a condom you die." Usage of the fear in persuasion can work for some time but doesn't last forever. Your customer needs to be a hero, you have to sell stories in which your listener feels like one. Stories can be explicit when a company creates them. Or, implicit, when its customers use a product to deliver their story, which becomes the story of the brand (e.g. GoPro cameras). The best way is to create a bridge between the history, what was it like, and the present, a product currently being produced.

Adaptive Upskilling as the Future of Workforce

Everyday learning is a must, something not only developers know very well. Exponential technologies are here and we have to be ready for them. Most of the kids studying currently in primary schools will work in industries not yet existing. Knowledge gathered in a school is not enough (probably never was), it is becoming obsolete in an increasing speed. Many tasks could be automatized, companies are using freelancers instead of full-time employees. Thanks to the huge competition in the market they tend to learn more. Will robots take our jobs? New technologies are already used in production, yet most of the recruiters can't catch a train, do not understand current demand needs. Michal is on the mission to upskill 1 million people.

Changing the world with the web

Finding new connections between data scattered in different locations through open data. Sally wants more people to be active in the UK. She showed booking portals where many different areas (places to visit, food tourism, insurance...) of people's needs are interconnected and used them as an example of what can be done in making their lifestyle better - bringing communities of different sports, places to train, etc. into one place. And that it can be done without deep knowledge with the leverage of existing (and free) tools like Google Sheets or Glitch. DX - developer experience and supporting people with different level of knowledge is a way how to get more people to the project.

Nice demo on how we can create animations in CSS & JS given by Eduardo. By using declarative way of defining them we can get easily more things done. Of course, more abstraction needs to be created. There are two types of animations - easings and springs. In the CSS only former can be used, for the later we need some assistance of the JS world, but can get more smooth results.

How can tech teams help or destroy a startup?

A startup cannot be built only with freelancers. Job jumping is too frequent due to high demand for developers and other creatives. It can harm their seriousness.

VR/AR are not flashy toys anymore

Great talk of what can happen when people creating AR product are not in place; that it is hard to build application only by photos taken by one person. No one should expect that target audience behave a way a product needs. Recommendation? Get real actors to the place of the act, don't rely much on things to be delivered by a customer. And give yourself enough time to prepare everything beforehand.

From a small team including only one designer to the moment, when designers cannot see everything that was created with their work. That means they can consult neither correct way of the implementation together with developers nor edge cases that can happen throughout the realization.

I was expecting something more Portals-oriented, but the almost whole talk was about other things. Tomas created React Union and I hoped for the deeper explanation of how portals were used in this project.

Just a small note aside from the interview - immediately after the discussion started people went to sli.do to ask their question. They were very creative, which, I suppose, was caused by the late hour of the day filled with great presentations. One of them, not a question that'd fulfill a description of "request for information" got the attention of the many: 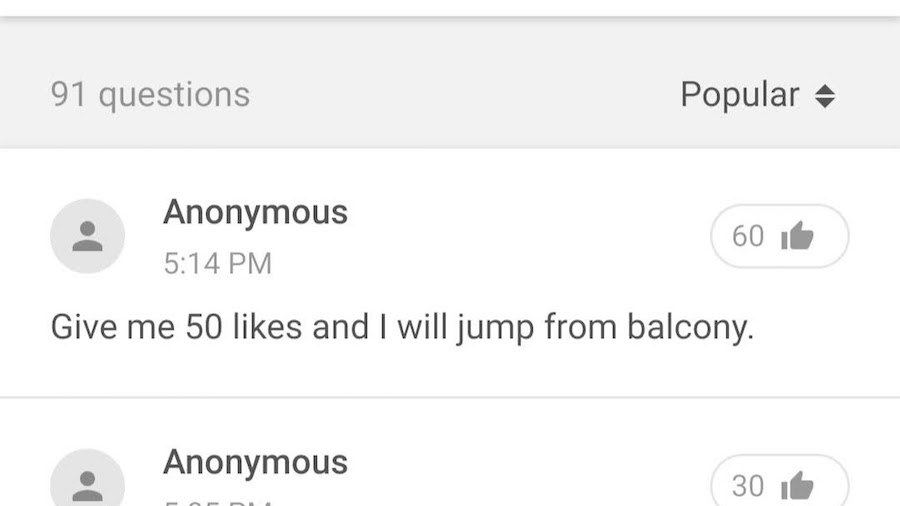 Ain't nothing has happened...

The main idea of Guillermo's presentation was do less to achieve more. In a nutshell, it's how his work can be described. He led us through the history of the development of his projects - socket.io, nextjs, zeit and explained why they are so popular. A team should be able to deploy every minute, not every quarter. Stressless, many *-less words were used. And yeah, duplication is cheaper than the wrong abstraction.

Machine learning is still tough and creates biased results based on human customs and assumptions (man-doctor, woman-nurse). Data is not objective or fair. FB algorithm picked for a year review a photo of a child who died recently (hint: don't post sensitive information publicly). Don't assume anything without context.

How to design the future

People tend to overestimate near future while underestimating distant future. No one can't trust what they see because of personalized bubbles they created. 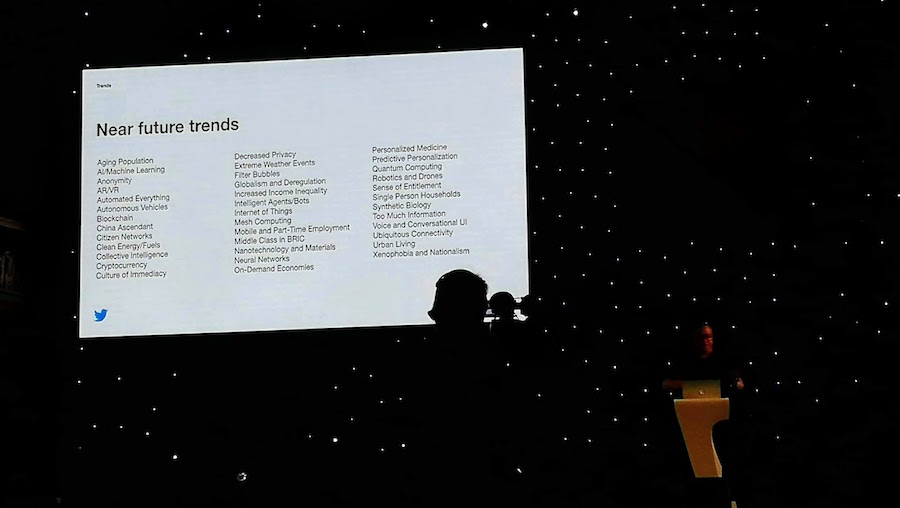 How to Build an Evil-Free Social Network

One of the best talks with a really nice and interactive slides. World of professional athletes needs a community to thrive. How to achieve that with a social network when professional athletes don't have time for that? Less on-screen, online time, less anxiety through the smaller amount of posts updates. 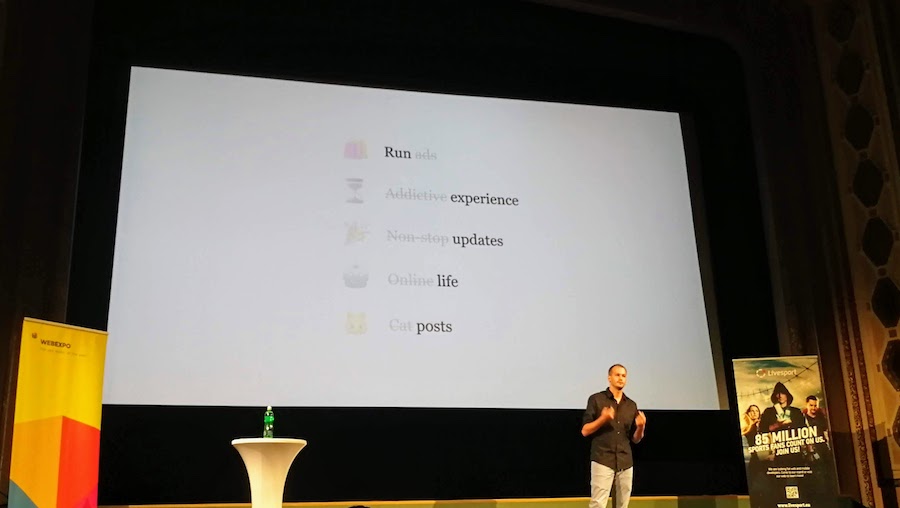 This was a very inspirational presentation given by Jakub, though I had a feeling I have had already seen it, indeed. How to help as a programmer? Effective Altruism. Efficient use of resources isn't volunteering (or giving money to the charity), but developing - that's what we can do best and affect hundreds, thousands or even more people. Research and software bought with public money (via taxes) should be public. If you want to help, but don't know where to start, look here for projects in Slovakia and Czechia.

What the developer understands is what will the product become. Please, don't give them Excel sheets filled with meaningless tasks. People responsible for delivering the product should be part of decision making before the kick-off.

It was more a TED-like talk. Jon's performance was a bit too much for me after the two long days. Still, I applaud him for that, also for that he was able to amend his presentation with many photos, notes and hints from previous talks or even from the afterparty (lots of beer). Ask provocative and original questions, play with them and surprise with the results. Bring emotions to the process.

A small note on taking notes

Personally, I've tried many different ways of taking them, currently settled with Google Keep on my phone. I somehow like how easy is to swipe with a finger on the keyboard displayed on the screen and get results I expect thanks to the good recognition and prediction algorithms. Still, I'm curious what others tend to use. So I was looking around from time-to-time to see what other attendees do in a hope I can learn something from them.

Mostly nothing, just listening, ... or coding (Why the heck anyone codes while attending a conference? Especially, when having an opportunity to choose from several presentations at the same time. It's just hidden from me). Those who did take notes used various software: Google Docs, Microsoft Word or OneNote, Notes for Mac or Evernote. Those from the offline world used pens and notepads and one of them stood out with the more creative approach:

Caught in the act! pic.twitter.com/zVG2wjNDyE

What I really liked is that all things started as scheduled. No wasted time. This is probably common on such big events, but it happens here and there and I can get really furious when persons in charge don't value the time of those who are responsible and can set their watch. Thankfully, this was not a thing at WebExpo.

One thing took my interest - live, place-oriented, notifications. It's called Nearby (for Android) and it allows to receive or even exchange data between devices regardless of the network connection. In this case, I received information about an ongoing talk and also other news from the event, like one ensuring attendees a key-speaker is on his way to the venue.

This is so great, I'd like to tinker with this technology myself.

Overall, it was a great experience!